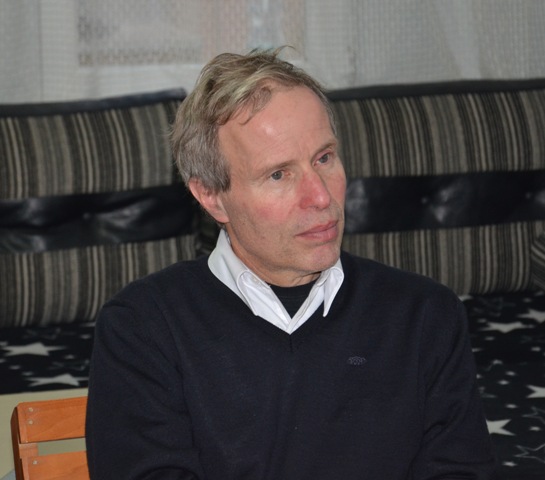 Balkan Sunflowers’ Gjakova volunteers were going to Kolonija for a synet ceremony. I went with them, my first time in a Roma community. The sun was down, the synet boy very quiet, the chickens very noisy, the camp fire and the welcome warm. The dancing – do I step dangerously into stereotypes? – the dancing was great! It was so passionate, and again, dare I say, sexy. Obviously, that evening, something close to 15 years ago, made an impression.

Already in 1999, Balkan Sunflowers volunteers in Kosovo were making connections in Roma communities, attempting to be of service; they were also discovering something of life, learning and receiving from Roma friends, families and communities.

In June 2000, I dropped off Brian and Eileen, two new BSF volunteers – freshly arrived, with a whole two-day training to prepare them! – in a newly rented apartment in Gjilan’s Roma mahalla. In Gjilan, we – the foreigners – began to learn something of the situation of Roma in the months soon after the war. While volunteers taught English and computer skills, and took children to the new city park (BSF managed its construction), volunteers also escorted local Roma to health house and pharmacy, to market, on random errands, as Roma did not feel safe to go on their own. The Roma mahalla, in the aftermath of the war, was a ghetto that people rarely left. I had not thought of volunteers as physical security for people who feared to leave their neighborhood on their own; I would not have approved moving into the mahalla – if I had realized that security would be part of the job of our 21 or 22-year old volunteers.  They, meanwhile, were learning Romani while teaching English, discovering the hidden paths through the mahalla, while teaching the hidden paths through the computer, playing games in the park, while discovering the games in a community. They made friends – Ali, Ramiz, Shpresa, Tefik, Ekrem and many more.  There were frustrations – but let us leave those unnamed.

We had multi-ethnic (children and staff) summer camps in Peja, Gjakova and Gracanica. In 2001, when two laptops went missing after the Gracanica camp, police went after and roughed up the two Roma camp staff members though we insisted it was not possible they did it. The laptops were recovered (a rare event) – and indeed the theft was by camp staff, but not the Roma: one of so many demonstrations over the years of the destructive operation of prejudice. Sebastian, one of those two Roma summer camp staff, is now Deputy Mayor of Gracanica.

Plemetina… I often wonder what this small village shows us. In 2002 when we started work there, and now many years later, the unemployment rate is very high, the health conditions under the baleful chimneys of Kosovo B are terrible, the high school and university options for residents are…. Well, let’s not go there. And yet, something seems to happen - something creative, optimistic, decent.

Scott, BSF Plemetina coordinator, and I were talking on the porch of our community center, when someone ran up: Fire! A house is on fire! We grabbed fire extinguishers and moved.  But it was too late, the roof rafters destroyed, the roof collapsed. Relief was not our work, but we were able to secure a very small container for the family, and then later a year’s rent. Eventually, others managed to build them a small house. This was – and is – a very good family. The father works hard.  His daughter is now one of the best students in the high school. But life is on the edge. For me, a personal connection with Plemetina started during that fire.

Why did “something” happen in Plemetina? I think, the Plemetina youth and children embraced every offering and every opportunity.  Games? Yes! Computer lessons? Yes!  English? Yes! Scouting? Yes! Tai chi? Yes! Video? Yes, yes, yes! This does not mean that that “village people” were less sophisticated than “city people”.  Far from it!  They just wanted to take every opportunity. That embrace of possibilities has meant jobs, university, filmmakers, music recorded, increased years in school… A group of youth really supported each other and had support from their families – something they brought with them to their encounter with Balkan Sunflowers – and then BSF added support.  There are thousands of communities around the world that could flower with some support. How tragic that we waste so much of our economic and human wealth that could support such flowerings. This remembrance was requested by Sami, once a Plemetina kid, creator of Rolling, a filmmaker, who also said Yes! to many of the possibilities.

I lived in the Plemetina Roma community for seven months in 2004.  More than ten of our volunteers have lived there over the years. The Plemetina Learning Center (PLC) is where we first discovered that youth tutoring younger children could have a profoundly beneficial effect not only on the children but also on the youth. We now include tutors in our five learning centers. The tutors showed us that when they cared about something, they could stay involved and committed, and not just lose interest after a few days or weeks.

Balkan Sunflowers and Balkan Sunflowers Kosova are not Roma NGOs. Our director, Muhamet, is Ashkali, but BSFK is not an Ashkali NGO either. Our staff and volunteers are humans. In some way or another, all of us are “marginalized”; we can all support each other in meeting challenges, in creating something more from what we are offered. From 1999, we did not intend for BSF to be “us” – the internationals – helping “you”, the locals. We wanted to create something where we created together. Welcome to the Rolling Film Festival – where we are still creating together.

<< Go back to the previous page